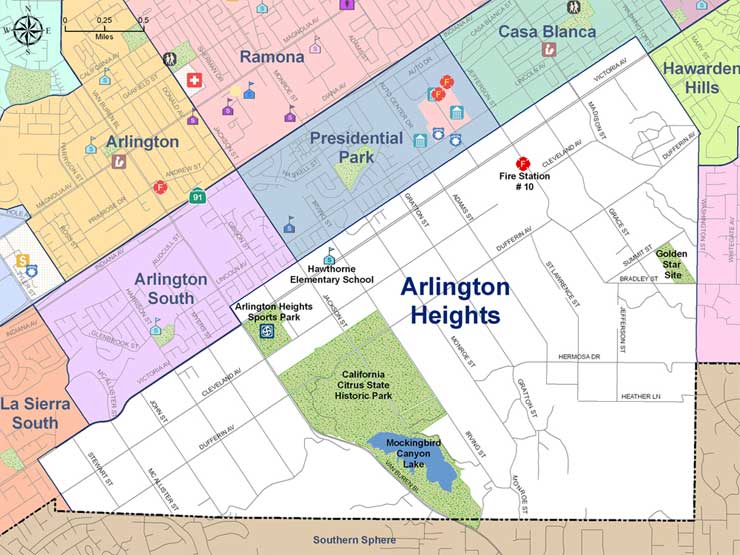 In 1875, people began settling in what is now the Arlington Heights neighborhood. When the City of Riverside was incorporated in 1883, Arlington Heights was included in the original 39.4 square mile city limits. Intensive agricultural development of the area was initially made possible by the Gage Canal. Completed in 1890, the Gage Canal utilized gravity flow in drawing down water from the Santa Ana River. Agricultural uses in the area continue to use Gage Canal water into the 21st century.

It is bordered by three neighborhoods to the north (Casa Blanca, Presidential Park and Arlington South), La Sierra South neighborhood to the west, unincorporated county land to the south, and the county line, Alessandro Heights and Hawarden Hills to the east (generally areas east of Washington Street).

The focus of this area has historically been citriculture due to the numerous orange groves and crop fields. The neighborhood is also commonly known as the Arlington Greenbelt. Arlington Heights is the meeting place for the Riverside of yesterday and the Riverside of today. Consistent with the rural character of the area, low-density, single-family residential development has over the years, integrated with the agricultural lifestyle so key in the early growth of the City. This neighborhood has the lowest residential density found in the City, with residential lots of 5 acres in size or greater.

Arlington Heights is well known for Victoria Avenue, a street of both natural and cultivated beauty; a horticulturalist’s delight. Studded with fragrant red ragged robin roses, pepper and eucalyptus trees, and its signature palm trees, Victoria Avenue is a showcase street that is the pride of the City. Because of its important historic significance, Victoria Avenue is listed in the National Register of Historic Places.

The neighborhood is enriched with three major natural arroyos; Mockingbird Canyon, Woodcrest and Prenda. Arroyos are not just conduits for water, but rich and varied areas of animal and plant life. As a result of voter initiatives Proposition R and Measure C, growth in the greenbelt has been very limited. Growth that has occurred has done so in a manner to preserve the agricultural character of the greenbelt as well as important valuable natural features such as the arroyos. Other important features include Mockingbird Canyon Lake and the California State Citrus Historic Park, which offers historic interpretation of the early citrus culture in Riverside and California. The site of the future Arlington Heights Sports Park, located on Van Buren Boulevard just north of the state park, will provide greater recreational opportunities for the surrounding area. Arlington Heights Fire Station No.10, located on Jefferson Street just south of Victoria Avenue, proudly serves the Arlington Heights neighborhood. Hawthorne Elementary School serves the neighborhood, in addition to many fine schools outside of Arlington Heights.