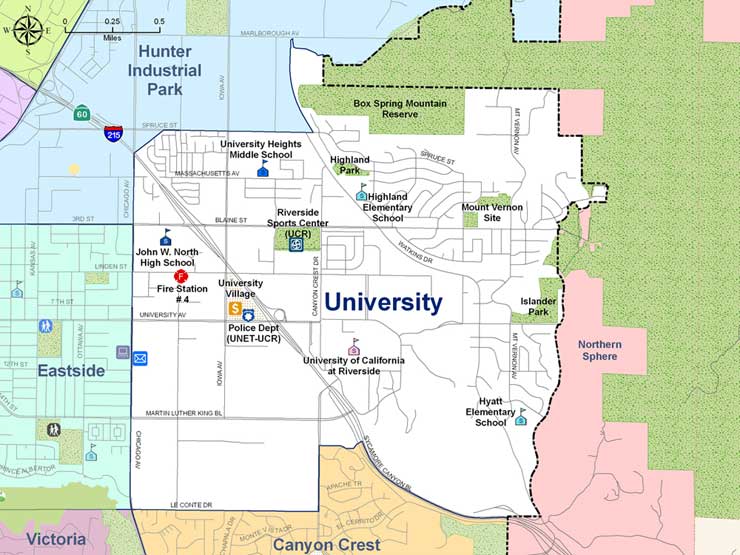 This neighborhood draws its name from Riverside's University of California campus. The Riverside Campus began in 1906 as a Citrus Experiment Station on a 23-acre site on the slopes of Mount Rubidoux. In 1917, the station relocated to the campus' current location on the slopes of the Box Springs Mountain. In 1954, the University began the expansion of its Riverside facilities beyond a citrus research center to become the general academic campus that it is today.

The heart of the University Neighborhood is the University of California Riverside. This University, which is part of the best public university system in the nation, occupies nearly half the land area on this region. This neighborhood offers a unique mix of land uses, ranging from high-density student-oriented apartments, to a thriving center of commerce and entertainment, to low density hillside housing and finally to large sections of farm land. The University Agricultural Experimentation Stations provide hundreds of acres of undeveloped land very near to the urban center of this area. The community surrounding the university is geared towards meeting the needs of the large student population of the area. Student housing dominates the region and businesses are concentrated along University Avenue, just a short walk from the school.

The University Village commercial development, built in the mid-1990’s, is continuing to expand and will offer a dense mix of offices and entertainment facilities. The eventual goal of this development, and the development of the surrounding area, is to create a very pedestrian-oriented environment.

The developed portion of this neighborhood is mostly flat, but the northern and eastern edges rise dramatically to become the Box Spring Mountains. This striking geographic feature provides a beautiful backdrop for the eastern edge of the city and offers a natural environment for hiking and other outdoor recreation.

Home ownership is high in the University Neighborhood, a fact that might be surprising considering the large student population. The large residential neighborhood that occupies a quarter of this region is almost hidden behind the University and reflects the architecture of the early 1960’s to the mid 1980’s.