Buzz on by for the Riverside Insect Fair on Saturday, April 30, 2023 from 10 am – 4pm in-person at the Main Library (3900 Mission Inn Ave). Get the chance to buzz in on Storytime fun with the Library, explore a Day in My Life with UC Riverside Entomology Graduate Students, learn how to create your own bug collection, shop and much more!

What makes an insect an insect? Learn about the body parts that all insects share and build your own with materials provided by the Museum of Riverside. Kit will also include magnifying glass, a collection jar and instructions for observing insects at home. Video tutorial will be available on Riverside Insect Fair’s website.


A Field Day on a Dairy
UC Riverside

A field work day on a dairy farm. Learn one of the methods to collect biting insects with UCR Entomology Graduate Student, Xinmi Zhang.


How do ants cooperate during an emergency?
UC Riverside

Ants form rafts when their habitat floods. Find out how they do it!


The World of Wasps
UC Riverside

An introduction to the most incredibly diverse group of insects- Hymenoptera (Ants, Bees, and Wasps)

Lice may be uncomfortable, spiders may be scary and Rolly Pollies maybe cute, but remember wherever they are, they are happier not in a jar. Join Mr. Brian as he reads and sings about bugs.

Join Kim Cobb, owner of The Lovely Bug in creating a Rock Bug Art piece. Once you’re finished creating your buggy art show it off in your garden or window seal.


The Path Most Traveled
UC Riverside

An introduction to insect pests of backyard chickens. It is recommended to watch this prior to the LIVE Urban and Medical/Veterinary Entomology Panel.


Cook with Chef Robert: Nothing but Crickets
Chef Robert

Join Chef Robert as he take a twist on the classic Lemon Honey Stir Fry by adding crickets as his protein.

How entomologists use data from iNaturalist in their research, how to add an observation to iNaturalist

Join Ms. Yesenia as she reads stories about bugs in both English and Spanish. For ages 5 and under.

Cook alongside Chef Robert as he teaches you how to make a healthy dinner with some fun buggy surprises.

What exactly do insects eat and how do they do it? Learn about four different mouth parts and how these specialized structures help insects chow down! Kit will also include magnifying glass, a collection jar and instructions for observing insects at home. Video tutorial will be available on Riverside Insect Fair’s website.

A day in the life of a harvester ant colony


Bee there, do that!
UC Riverside

Watch a video montage on spanning bees that the McFrederick Lab works on.

Can you flap your wings like a ladybug or wriggle along like a caterpillar? Join Ms. Abby for her storytime about lazy ladybugs and hungry caterpillars. For ages 6 and under.

Dr. Hollis Woodard explains the motivation behind her research on bumble bee physiology, behavior, and conservation. Then, she briefly describes the behaviors of a foraging bumble bee in the field.


Small Things Can Tell a Big Story
Museum of Riverside

Join us for a behind the scenes look at the Museum’s entomology collection. Why does the Museum of Riverside collect insects? What can we learn from these collections and how do they help us understand climate change?

An introduction to commonly encountered assassin bugs of California.


A Day in the Life of a Plant Bug
UC Riverside

Join Councilmember Edwards for storytime as she reads Super Fly Guy with her daughter Ramona.

How to sample for the Asian citrus psyllid for backyard home owners.

We'll cover how to find and photograph jumping spiders including their biology, macrophotography techniques, and equipment.

Create a unique, insect-inspired, 3-D cut-paper art piece. This activity will be created and led by local artist, Kim Cobb, owner of The Lovely Bug.

Join Kim Cobb, owner of The Lovely Bug in creating a Rock Bug Art piece. Once you’re finished creating your buggy art show it off in your garden or window seal.

Learn how to create an origami butterfly corner bookmark. A fun and easy way to keep your place and decorate your book!

Did you know that insects go through puberty too? If they do go through puberty, how? One early question of scientists studying insect development was whether insects use hormones to mature into an adult, kind of like us! An experiment that was done to test this idea, called a ligation experiment, involves tying a string in the middle of an immature insect to block normal hormone signaling in half of the insect. This video will demonstrate the ligation experiment using house fly larvae to show what happens when only half of a larva can receive hormones!

Learn to make some tasty mocktails inspired by some of your favorite bugs. 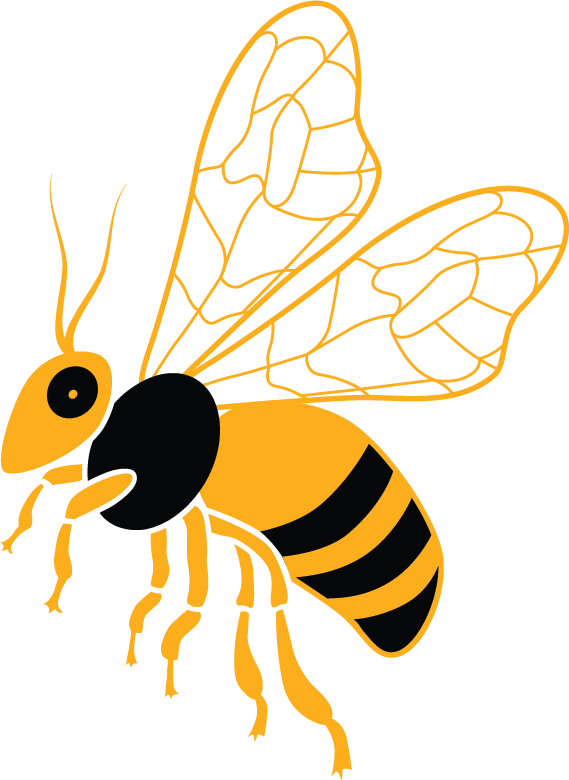 Get the buzz by following us on social media for the latest updates. The Queen Who Banished Bugs 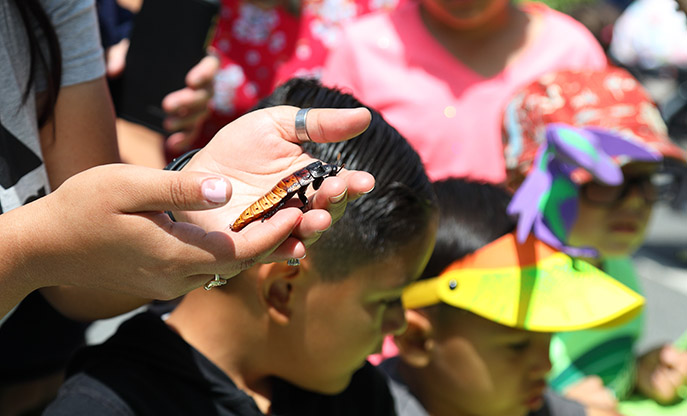 Riverside insect fair looks at bugs — how to admire them, how to cook them

Madison Sankovitz studies ecology and genomics of social insects, which are insects that live in colonies. Sankovitz is interested in the ways in which ants impact soil ecosystems through their subterranean nest-building, and how ant populations are impacted by climate.

Did you know that we can rear and release tiny parasitic wasps to help control pest insects in agricultural systems? These tiny wasps, which are harmless to humans, are called parasitoids. Dani Ruais study these parasitoids in order to help growers integrate them into successful pest management strategies for their crops.

Dr. Quinn McFrederick leads the McFrederick lab which aims to understand the evolution and ecology of the relationship between wild bees and their symbiotic microbes.

Thread-legged assassin bugs are a group of insects found all over the world, several of which use spiderwebs to both steal prey caught in the web and to attack the resident spider who built the web! Samantha Smith studies relationships between these fascinating insects, and the evolution of this incredible behavior.

Stephanie Castillo studies the biodiversity and diversification of assassin bugs (Reduviidae), specifically the lobe-headed bugs (Pseudocetherinae) and pirate assassin bugs (Peiratinae). Currently, Castillo is documenting and describing over 20 new species of Pseudocetherinae that are unknown to science but have been sitting in natural history museums around the world for many decades under the wrong classification or without a name.

Within ant and other social insect colonies, the majority of individuals are sterile female workers, meaning that they do not produce their own offspring. Instead, they carry out several colony maintenance tasks, such as collecting food, building the nest, and raising the developing offspring of one or several reproductive queens. Mari West studies what factors impact which tasks individual ant workers perform. Specifically, West is interested in whether the size and genetics of ant workers impact task choice, specialization, and efficiency and how these behaviors are coordinated at the colony level.

Tessa Shates works on plant-infecting viruses that are spread by small, sap-sucking insects called aphids. These viruses infect our crop plants, but Shates specifically looks for crop-viruses in native California wild squash using field research and molecular lab techniques. Picture is Shates holding two dixie squash plants - one is "healthy" (left) and the other is infected with the "Cucurbit aphid-borne yellows virus" I found in my wild sqush plants (right).

Did you know there are actually several species of bees humans use to pollinate crops? One such species is the alfalfa leaf-cutter bee. Jake Cecala is conducting research on how diet quality and exposure to pesticides influence the health and reproduction of this important pollinator.

Dr. Woodard leads the Woodard Lab and a research group that uses bumblebees as a model system for understanding the proximate mechanisms underlying adaptation, sensitivity, and resilience.

Jaimie Kenney is broadly interested in the biology and ecology of plant pathogens and their insect vectors beyond the borders of agriculture in natural ecosystems. Her research at UCR focuses understanding relationships between tiny, sap-sucking insects called psyllids, the bacterial plant pathogens they transmit, and California native plants.

Dr. Gerry is a Professor of Veterinary Entomology at the University of California at Riverside. Previously, Dr. Gerry was employed as a Senior Public Health Biologist for the California Department of Public Health and as a medical entomologist in the United States Army. Dr. Gerry studies the biology, ecology, and integrated management of pest arthropods and disease vectors of animals. Of particular interest is insect dispersal, the impact of ectoparasites to their hosts, and the behavior of biting flies that transmit pathogens.

Xinmi Zhang research interests focus is on veterinary entomology. Particularly, Zhang is interested in the host-seeking activity of biting midges on southern California dairies, overwintering mechanism of bluetongue virus that biting midges can transmit, and the species diversity of biting midges in SoCal desert areas.

Ian Wright is an entomologist and professional photographer working on Asian citrus psyllid biocontrol in the Entomology department at UC Riverside. He is broadly interested in natural history, conservation biology, and documenting biodiversity.

I’m a first year PhD student in the McFrederick lab, where we study bee-microbe interactions. I’m interested in how the fungus, Ascosphaera, has evolved to become pathogenic to bees. I also study bees that have ditched their vegetarian lifestyle and began to eat dead bodies! I love evolution, symbiosis, macro photography, all things outdoorsy and much more - let's connect!

Tatiana Bush is a 4th year undergraduate in the Heteropteran Systematics lab. She works on the molecular phylogenetics of California species of the subfamily Phylinae within the plant bug family Miridae.