RIVERSIDE, Calif. – Mayor Rusty Bailey called on business and civic leaders to join with city government to continue to elevate Riverside on everything from sustaining the strong local economy to building more attainable housing and reducing the incidence of homelessness through partnerships with non-profits and faith-based organizations.

Bailey made the comments during the 42nd annual State of the City address, his seventh as Mayor of Riverside. The free event at the Riverside Convention Center is produced by the Greater Riverside Chambers of Commerce in partnership with the City of Riverside.

Bailey announced Luz Negrón as the winner of the Dr. Carlos E. Cortés Award for Championing Diversity and Inclusivity. The award is named for the UC Riverside professor emeritus of history who is the single most influential force in shaping the City of Riverside’s Inclusivity Statement, which guides the City’s efforts on this important issue.

The Chamber announced winners of the annual Beautification Awards from Keep Riverside Clean & Beautiful and presented March Field with the Riverside Hero Award, which goes to the entity that has made a significant contribution to promote the community at the state or national level during the past year.

Bailey’s remarks included a positive look back on recent successes in creating housing for homeless individuals, building an unprecedented amount of housing in the downtown core, and increases in both the local employment rate and home values.

The first four cottages for homeless people to be constructed on the grounds of a faith-based organization were completed last month at The Grove Community Church. More than 80 companies and organizations volunteered their time and resources to the project, as did more than 250 volunteers.

“We closed out 2018 strong and elevated Riverside for our neighbors without homes,” Bailey said, citing major contributions from pastors Tom Lance and Daniel Bishop at The Grove and from Brian Jaramillo at Tilden-Coil Constructors. “This barn-raising effort is truly the greatest example of unconditional love that I have witnessed as your Mayor.”

Riverside also elevated public safety with additional investments in personnel and equipment funded through the voter-approved Measure Z. More than 700 downtown housing units are either built, under construction or permitted – nearly three times as many as have been built in the past 20 years. And Riverside’s employment grew nearly 3 percent, driving the unemployment rate down to 3.9 percent and helping the median home value increase by more than 8 percent, Bailey noted.

The Mayor also cautioned that serious challenges lie ahead. He noted that the city, under the guidance of City Manager Al Zelinka, is working proactively to ensure that Riverside will be able to meet its pension obligations in the coming years without creating an undue burden on the city’s General Fund.

Riverside Public Utilities, the city’s locally-owned water and power provider, is working with Southern California Edison to obtain approval of a second connection to the statewide power grid. This second connection, called the Riverside Transmission Reliability Project, or RTRP, is designed to ensure the city is protected from a serious power outage while maintaining access to enough power to continue to grow the local economy.

“This project is the most important infrastructure investment our city will make in this generation, and for many generations to come,” Bailey said. “Similar to the Gage Canal, which brought water to a growing Greenbelt, RTRP will allow for future growth, as well as protect us from future blackouts.”

Bailey thanked City Council members Mike Soubirous, Chris MacArthur and Steve Adams for their service to the city. All are not seeking re-election and will leave the council later this year. He also thanked Councilmember MacArthur for agreeing to chair the fundraising committee to support a new Youth Innovation Center in Arlington Park, which MacArthur represents.

The mayor noted that, with three council seats on the ballot in June, there is an opportunity for new leadership this year. He emphasized that Riverside’s successes are due in part to strong leadership on the council, and across the city.

“In politics, you introduce fear to win. In leadership, you remove fear to succeed,” Bailey said. “In Riverside, we choose to focus on leadership, developing leaders in every generation, at every employment level, in every ward, and at every college and school.”

From new culinary destinations like the Food Lab – recently named the 6th best food hall in the country, despite being in its first year of operation – and the planned Chow Alley, to a new commitment to support non-profit organizations through an effort called Giverside (giverside.org), Riverside works best when it works together in a spirit of innovation, Bailey said.

“As you have seen and should be able to feel, all across our city, Riverside is moving on up,” Bailey said. “Yes, we are progressing toward a future that we can't fully predict. But we can certainly influence it through decisions made by our City Council and community stakeholders -- especially when made through consensus-building and collaboration, because that is the Riverside Way.”

2019 State of the City Address 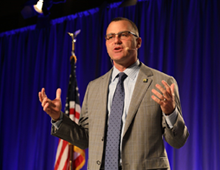